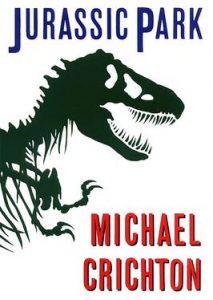 I’m assuming the premise for Jurassic Park is fairly well known. A private company has figured out how to clone dinosaurs and decided to make a profit by opening a theme park on a small privately owned island.

In the start of the book small reptile-like creatures has made it to the mainland and is making trouble. Investigations are made, but human stupidity and people assuming they know what the creature is make the progress very slow.

Meanwhile, before the park has opened to the public, a couple of scientist that unknowingly helped make the park a reality (paleontologists, biologists, mathematicians, etc.) are invited to the park to see what they helped create. Things start to go wrong not long after they arrive.

The buildup to the action is very long in this book, but it means that there is also a long buildup of tension. This result in it being freaking terrifying when shit goes down. When stuff start to go poorly the tension is at a crescendo, and I had goosebumps all over. I was also fairly close to hyperventilating. (Note: If you listen to the audiobook like I did, I do NOT recommend listening to this part of the book while driving).

Jurassic Park is very much a science-centric book. It mostly deals with genetics but also computer science, mathematics, and behavioural science.

The foreshadowing was well done. Sometimes it was very obvious but it worked well with the story and with keeping the tension up. You just KNOW it’s going to get worse.

I found some of the characters very annoying. At least some of these were annoying on purpose. For example: a character being willfully ignorant of the dangers and their own faults, and a young girl that was being very whiny (while completely in character for a young child) made me very annoyed. At the same time all the characters were very human with plausible, realistic, faults that affected the story in the choices they made

Overall I found it to be an interesting and occasionally deeply terrifying read.

Reminds me of: A bit reminiscent of Asimov’s books regarding the explanation of the science. The very best parts of this book gave a similar feeling (terrifying suspense) to the very best part of ”2001: a space opera” (and by that I mean the part with HAL 9000)

Checks of (from my 2018 reading list): “A book made into a movie you’ve already seen”